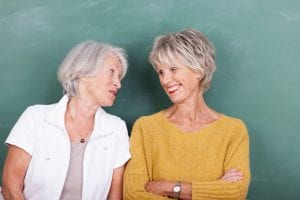 If you overheard a conversation about the gender gap, you might automatically think about it in terms of pay, given the relatively recent requirement for firms with more than 250 employees to disclose their pay data.
What is less well known though is the gender pension gap. In the UK, this is thought be between 30 and 40% and down to two principle reasons:

So why would a woman need more money in retirement than her male counterpart? In part, it’s down to mortality; women are more likely to live longer than men (estimations suggest by 2.5 years from age 65), which means they will need a bigger pension pot to secure the same level of income throughout their retirement. Because women are more likely to out-live their male partner, they would also effectively lose that second income and potentially have to shoulder things like healthcare-related costs on their own.

Less likely to save as much as men

Women also typically have shorter careers than men; given they are more likely to take career breaks to have children. They are also likely to earn less – as we know from the gender pay gap reports.
What’s more, women typically save less than men and are likely to be more cautious when it comes to investing – which means, although there’s less risk to their capital, they would lose out on the higher rewards that more adventurous investments have the potential for.

There are a number of ways women can boost their income in retirement:

The value of investments and any income from them can go down as well as up and you may not get back the original amount invested.
HM Revenue and Customs practice and the law relating to taxation are complex and subject to individual circumstances and changes which cannot be foreseen.
If you’d like to know more about investing for retirement, please talk to us for advice